The Automotive Oils Dictionary – A

To get the best out of your automotive oils investment, it’s always a good idea to know what exactly is written on the product labels. In this Automotive Oils Dictionary series, we are going to do just that. 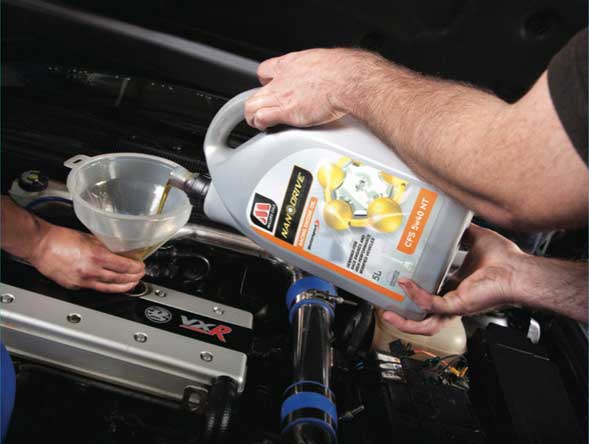 Abrasion
The wearing, grinding, or rubbing away by friction. Abrasion is usually due to the presence of foreign matter such as dirt, grit or metallic particles in

Absolute Viscosity
The product of Kinematic Viscosity and Density.

Acid
Corrosive solution formed by the combination of hydrogen and oxygen atoms with metal or metallic radicals. Acidic solutions may be neutralized with a base or alkaline solution.

Additive
A chemical added in small quantities to a base fluid in order to improve specific properties of the lubricant such as fluid life, lubricity, wear protection, rust protection, etc..

Adhesion
The property of a lubricant that causes it to cling or adhere to a solid surface. Wear occurring when surfaces contact, weld together and shear off.

Air Entrainment
The incorporation of air in the form of bubbles dispersed in a fluid. Common when an improper amount of antifoam agent is added to reduce foaming.

Ambient Temperature
Temperature of the air surrounding the point of application.

Anti Wear Agent
An additive that minimizes wear caused by metal-on-metal contact by forming a film on the metal surfaces, typically activated by heat and pressure.

Anti-Foam Agent
An additive that causes foam to dissipate more rapidly. It promotes the combination of small bubbles into large bubbles which burst more rapidly.

Antifreeze
Solution in an engine cooling system that lowers the coolants freezing point and raises its boiling point.

Anti-Oxidant
A chemical added in small quantities to a petroleum product to increase its oxidative resistance in order to prolong its service life.

Anti-Wear Agent
An additive that minimizes wear caused by metal-to-metal contact during conditions of mild boundary lubrication (e.g. stops and starts, oscillating motion). The additive reacts chemically with, and forms a film on, metal surfaces under normal operating conditions.

API (American Petroleum Institute)
A society organized to further the interests of the petroleum industry. It serves to clear information, conduct research, improve marketing conditions, etc. One of the Institute’s activities has been the development of the API Service Classifications for crankcase oils, and rules for Base Oil Interchange, which give rise to Base Oil Groups I-V.

Apparent Viscosity
A measure of the viscosity of a non-Newtonian fluid under specified temperature & shear. Viscosity is expressed in units of centipoise (cP).

Aromatic
Cyclic unsaturated hydrocarbons identified by one or more benzene rings or by chemical behaviour similar to benzene. Aromatics are usually more reactive and have higher solvency than paraffin and naphthenes. Aromatics readily undergo electrophilic substitution; that is, they react to add other active molecular groups, such as nitrates, sulphonates, etc. Aromatics are used extensively as petrochemical building blocks.

Ash
Metallic deposits formed in the combustion chamber and other engine parts during high temperature operation.

Ash (Sulphated)
The ash content of an oil, determined by charring the oil, treating the residue with sulphuric acid, and evaporating to dryness. Expressed as % per mass.

Asperities
Microscopic projections on metal surfaces resulting from normal surface finishing processes. Ideally the lubricating film should be thicker than the combined height of the opposing asperities.

ASTM (American Society for Testing and Materials)
The organization devoted to “the promotion of knowledge of the materials of engineering, and the standardization of specifications and methods of testing.” In North America, a preponderance of the data used to describe, identify, or specify petroleum products is determined in accordance with ASTM Test Methods.

Auto-Ignition Temperature
Minimum temperature at which a combustible fluid will burst into flame without the assistance of an extraneous ignition source. This temperature is typically several hundred degrees higher than the flash and fire point.